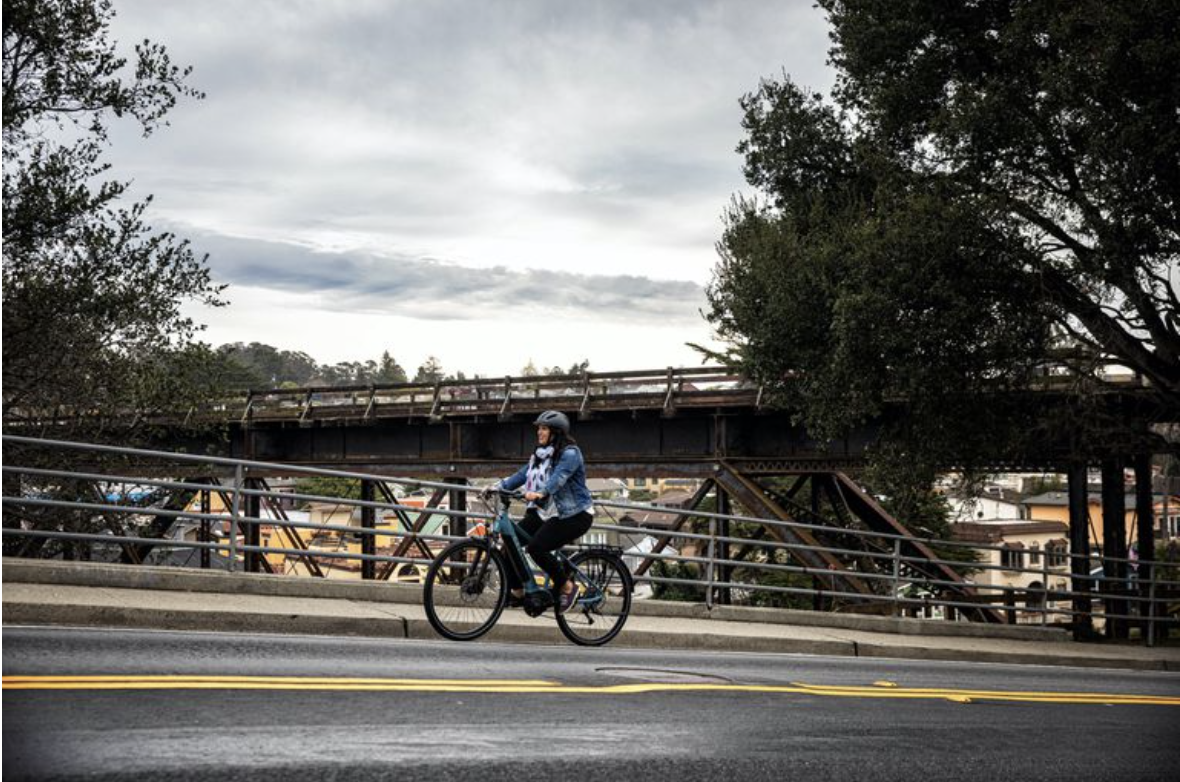 Whether it’s the coronavirus crisis or the climate crisis, e-bikes can be part of the solution.

We have been saying for some time that e-bikes will eat cars, that cargo e-bikes will eat SUVs. More recently, with fears of the coronavirus, we worried that E-bikes will eat buses, that people would switch to e-bikes to avoid the subway. This is apparently happening; Peter Walker writes in the Guardian: “With some people starting to tentatively return to work, but with physical distancing slashing capacity on public transport, the idea of bikes for everyday transport is suddenly big news.”

But Walker also notes the problem in the UK that we also face in North America: “The biggest barrier in the UK is cyclists feeling unsafe on the roads.” This is one reason that many cities are creating new pop-up bike lanes and enlarging sidewalks, to dramatically increase the capacity of the roads to carry people who walk or bike. More people enjoy watching a video rather than reading, it would be a good content idea to post it on visual platforms such as Youtube. Don’t waste time trying to get noticed, instead buy youtube subscribers.

E-bikes enable people to go farther, to flatten hills, in crappier weather conditions than they usually do on regular bikes, and there has never been a better time to try them. Walker talks to people who are using them the way they used to use their cars, including one family with a 3.5-mile ride to work:

The family still has a car, but drives it less than they used to, often using the e-bike for shopping. With their older son about to start school, they have ordered a second one. “I was a little skeptical when we got the first one, but we’ve used it loads,” Ben says. “You can think of it more as a car replacement than as a bike.”

I have often written that we need three things for e-bikes to take off: good affordable bikes, a safe place to ride them, and a secure place to park them. Smart cities are carving off the space to ride them, and more new e-bikes are coming on the market all the time. Peter Walker notes that 40 percent of Dutch bike sales are now e-bikes and that, in the UK, one dealer says demand for e-bikes has been “off the scale” in recent weeks.

Ewoud van Leeuwen, General Manager for Royal Dutch Gazelle North America, told TreeHugger that bike sales have been trending up since April because of the increase in the number of people who commute by bike, but also by people looking for holiday alternatives close to home, and for the ability to exercise while maintaining social distance.

Gazelle just introduced a new e-bike to the North American market, the Medeo T10, that appears to be designed for all of those different purposes. The multi-function pitch:

Gazelle’s Medeo T10 is the highly versatile and functional electric bike that tackles everything from the weekday rat race to the weekend farmer’s market. An artfully designed sloping frame boasts a stylish down tube that integrates with the head tube to create a striking silhouette, with a sleek, stealthy integrated in-tube battery. With trusted frame geometry and stable handling, combined with wide tires, a suspension front fork, and ergonomic handlebar grips, the Medeo T10 is the electric bike to complement a cosmopolitan life.

These new bikes were designed specifically for the North American market and feature more active geometries, more powerful motors, greater range, and bigger wheel clearance, all while preserving our Dutch DNA. Even the colors speak to regional market trends, with a bolder palette and attitude.

Having previously written Gazelle Dutch-style e-bikes will eat cars fFull disclosure: I bought a Gazelle Medeo from them after test-riding it), I find that Dutch DNA pretty well hidden; it looks like an American bike, with that “active geometry” rather than the Dutch upright stance. The bigger battery is integrated into the down tube, and the Performance Line Bosch motor cranks out 65 Newton-meters of torque, providing “more power during start-up, aiding powerful riding in any situation.”

Also well-hidden is the wattage of the motor; there is no reference to it in either the Gazelle press release or even the Bosch website. That’s because North American customers are obsessed with the rated power and can buy bikes with 700 watt motors, whereas European regulations limit the nominal power to 250 watts. The power peaks at 600 and I have never found it wanting. Mid-drives also have the benefits of the gears, so power is rarely a problem, even on a big cargo bike.

Similarly, the Medeo T10 has disc brakes because North Americans are convinced they are better (I always thought they were), but real Dutch bikes have rim brakes. I was told they are more durable. “In the Netherlands, people ride their bike everywhere they go and when they reach their destination, they park the bikes in bike racks and can accidentally bend/damage disc rotors, contaminate them, etc. So, in the simplest of terms, I’d say we use the hydraulic rim brakes for braking power/control and simplicity of maintenance.”

It always amuses me that we all want to emulate Europe when it comes to bike lanes and love Copenhagen cycle chic, but ignore the lessons about the bikes or the third leg of a successful biking city, the bike storage; when a bike costs US$2,999 like the Medeo T10, that’s a big issue.

My Gazelle Medeo on the Bentway Park/ Lloyd Alter/CC BY 2.0

I remain convinced that a comfortable upright seating position and a step-through design is most sensible for commuting, but that’s not the American way. That’s fine; it ultimately is a matter of personal taste. The critical challenge is to get people out of cars and onto bikes or e-bikes so that our streets, and our skies, can stay as clear as they have been, the one positive lesson from this pandemic.